The Reds beat Chelsea in the Carabao Cup final in an absolutely thrilling contest. The Reds had plenty of chances and even a controversial offside given against and in their favour.

Also, keep reading till the end for a surprise!

However, the game came down to a nail biting finish as neither side could finish their chances. From Moh Salah not turning up his game tonight to several offside calls, forwards were nowhere to be seen.

However, the most controversial call of the game may have went in Liverpool’s favor. What do you all think? Offside or not?

📸 – Lukaku's goal is disallowed due to offside. pic.twitter.com/fQNYk0eGVl

It’s certainly true that there’s only so much keepers can do, but Liverpool have to thank the Spaniard. Watch Kepa Arrizabalaga’s miss down below:

KEPA was brought on for penalties, made 0 SAVES out of 11 and did this with his 😂😂😂😂😂 pic.twitter.com/7iT0C2bjko

None of that matters now, though. Jurgen Klopp’s men lay their hands on another piece of silverware tonight.

Best part about it? It will give Liverpool immense momentum going forward in the Premier League and the Champions League.

"I didn't even think I scored the winning penalty!" 🤩

While this wasn’t the best of nights for either goal-keeper, Kepa or Kelleher, the Irish keeper won’t care. Liverpool winning the game through a Kepa miss was poetic.

Caoimhin Kelleher. What a deserving experience for a young yet mature man who never looked out of place up against one of the very best keepers in the world, as well as vs the most expensive. A lovely reward, especially for the steel he showed during the injury crisis last season

Thomas Tuchel took off Edouard Mendy for the penalty shoot-out as he wanted Kepa to face it as the penalty specialist. It would eventually backfire, as the Spanish keeper would neither save a penalty and also miss his own.

Klopp’s trust in letting Kelleher start the game while Tuchel’s distrust of his starting keeper misfiring. Two contrasts that must have Tuchel holding his head down in regret tonight.

Oh, also, did we tell you Liverpool are now the record holders for most League Cups won? Well now here you go! We go ahead of Man City who’ve won it eight times.

Liverpool’s previous League Cup triumph was in 2012, while the very first was in 1965 under Bill Shankly.

Klopp’s men keep on piling those trophies up while the rivals barely scratch top 4. This one must also leave a sour taste in Man United’s mouth, maybe even more so than Chelsea’s.

Alas, that’s all we’ve got for you tonight! As a gift, you can go watch the whole penalty shoot-out here!

Related Topics:Featured
Up Next

Check out all the tweets, opinions as Minamino fires Reds into FA Cup Quarterfinal

Check out team news, preview and more as Reds go up against Chelsea in the Carabao Cup final

Check out team news, preview and more as Reds go up against Chelsea in the Carabao Cup final

Liverpool heads into the Carabao Cup final tonight to take on Chelsea. The Reds are in fine form across all competitions, having hammered Leeds by 6 goals in their last game.

Klopp’s men beat Arsenal 2-0 on the aggregate in the League Cup semi final to play this final. On the other hand, Chelsea dominated Spurs across both legs in the semi final to qualify for the final. 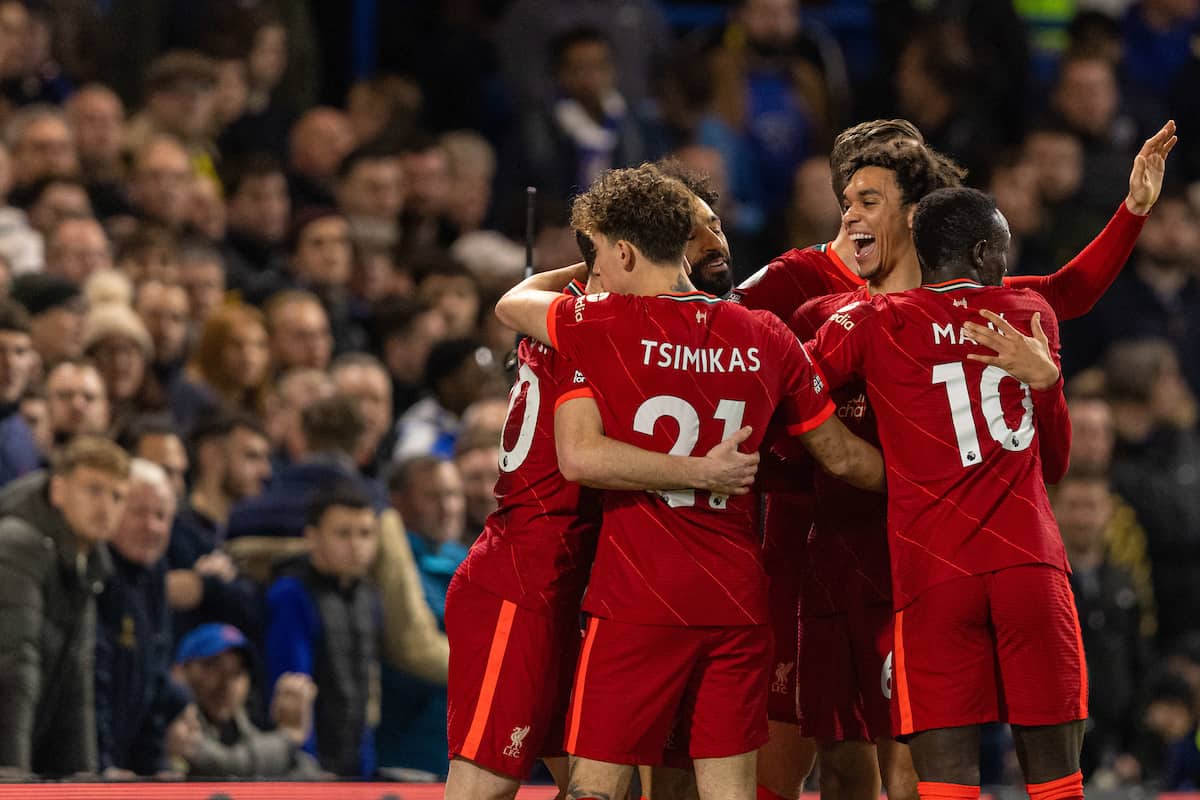 Liverpool have become used to silverware under manager Klopp lately. Of course, a League Cup may not be as shiny as the Premier League UCL trophy, but the Reds will go all guns blazing for it.

The two German masterminds will once again come head to head in this final. While the Reds might be favourites for this game, the last time Liverpool underestimated Chelsea they almost paid dearly for it.

Jurgen Klopp will have to contend with Brazilian Roberto Firmino being out for this game. His other center forward, Diogo Jota will also be out a major question mark for the final tonight.

The Portuguese forward picked up an ankle injury in the game against Inter Milan and has since been out. Nevertheless, he may still be seen on the bench.

Other than the two forwards, Reds have their whole squad ready for the game. Luiz Diaz, Sadio Mane and Moh Salah are expected to head the forward line.

Chelsea have been unbeaten across all competitions since their PL game against City in mid of January. Still, we expect the Reds to prove to be too much for the Blues to chew.

With Moh Salah and Sadio Mane in form, any backline would be worried. Moh Salah and Mane both bagged a brace midweek, as if in preparation for this final.

The forward, who moved to Liverpool for £34.3m from Roma in June, is the Premier League’s second-top scorer with 22 goals, one behind Harry Kane.

Fowler trusts Salah, who has scored 30 times in all competitions this season, will hope to add 10 more goals to his count before the finish of the crusade and says he could help control Liverpool to silverware sooner rather than later.

Talking at a philanthropy occasion for Red Neighbors, which focusses on nourishment destitution and training, Fowler revealed to Sky Sports News: “That is the point of his [to achieve 40 goals], it’s mind-boggling what he’s accomplished up until this point.

“I don’t think anybody could’ve visualized what would’ve happened. I think everybody knew Salah was a decent player, yet to get where he is at speed he’s done – it’s alarming.

Salah and Kane look set to fight it out for the Golden Boot until the finish of the season, yet Fowler feels the Spurs striker can see for Premier League goalscoring records past this term, saying he could outperform Alan Shearer’s 260 goals pull on the off chance that he stays in England.

“On the off chance that he gets anyplace close to [Shearer’s record], he did strikingly well,” he included. “The exhibitions to date have been extraordinary, and he looks as if he’s a player that can score goals consistently.

“He’s gone past the first year, second-year disorder, yet to get where Alan Shearer is I imply that is intense, it indeed is. You depend on him to remain in the Premier League [to break the record]. I’m sure Tottenham wouldn’t enable him to go to another Premier League club, they wouldn’t need him to leave the full stop.

“I believe that is the place it lies, on the off chance that he remains at Tottenham in the Premier League he has a decent shot since he has a lot of good goals in him.”